Healthy teeth for a new taste of life! 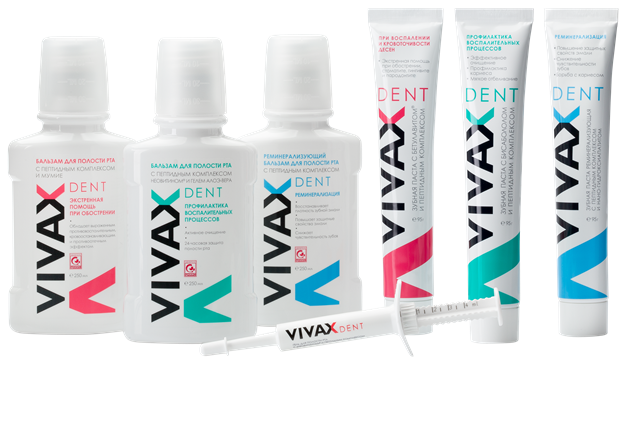 Neovitin bioantioxidant complex
preparation made from the relic ginseng. It has an active antioxidant and anti-inflammatory effect. It is able to stimulate the activity of own antioxidant system of the human body.
Aloe Vera Gel
jelly-like substance found in the leaves of the Aloe Vera plant, growing in arid areas of Africa, Asia, North America. Known as a "first aid" plant. Its composition includes saponins, which are glycosides that have cleansing, antiseptic properties. Saponins block the bradykinin hormone, responsible for the development of inflammatory processes. Vitamins B1, B2, niacin, B6 and C, choline, folic acid, E, beta-carotene in the Aloe Vera composition allow to maintain the integrity of the metabolism in paradontium tissues and make them more resistant to stress effects.
Xylitol
birch sugar, a polyhydric alcohol, slows the growth of Streptococcus mutans, which prevents the development of caries.
Betulavit
birch bark extract. It has anti-inflammatory, antioxidant effect.
Pyrophosphates
contribute to the removal of plaque and prevent the fixation of microorganisms on the surface of the teeth and the formation of dental plaque, increase the efficiency of cleaning and prevent the development of caries.
Shilajit
natural resin-like product of biological origin. It contains a complex of amino acids, micro-and macronutrients, waxes, resins and other substances. Activates the processes of cellular metabolism, accelerates the healing and regeneration of tissues.
Bisabolol
It is found in essential chamomile and lavender oils. It has an anti-inflammatory and soothing effect.
Sorbitol
six-atom aliphatic alcohol with a sweet taste. It is used as a sweetener and moisturizing component.